Computational Psychiatry: how neurotechnology is changing the world of mental health ?

By Yohan Attal, Co-founder and CEO of myBrain Technologies.
PhD in brain imaging and signal processing from the Faculty of Sciences of Orsay.

Neuroscience and artificial intelligence are about to revolutionize medicine, especially psychiatry. Today, psychiatry is largely based on a patient’s subjective report of symptoms. Neurotechnologies offer a range of new tools based on objective and empirical data which will revolutionize the diagnosis and prevention of psychiatric pathologies. We are entering the era of computational medicine where digital technologies, such as magnetic resonance imaging (MRI) and electroencephalography (EEG), will play a major role in unraveling the mysteries of mood, anxiety, and depression.

Towards an ethical digital transition in psychiatry.

Psychiatry is currently facing major challenges. Doctors are ringing the alarm bells. The services are overwhelmed by the flow of patients and despite everything, a part of these patients, suffering from major mental disorders, are not being treated. This situation is only getting worse. Nearly one billion people in the world suffer from a mental disorder: a figure that is constantly increasing due to the impact of covid-19 (WHO & al., 2020)[1].

A personalized and integrated medicine, which would combine objective science and customized therapies, is becoming a necessity in helping to alleviate some of the major difficulties that psychiatry faces today.

For example, classical psychiatry still has a strong bias towards treatment with drugs, which are often necessary, but whose response to treatment brings its share of side effects.

With Computational Psychiatry, the clinical protocol embodied by the intake of a medication would be accompanied by a multidimensional analysis. It would take into account objective criteria, such as the EEG, and subjective criteria, through a personalized psychotherapy more oriented towards finding deep meaning for the patient.

Similarly, in today’s psychiatric world, patient care is increasingly complex and the patient’s journey is full of pitfalls. The categorization of pathologies is still very much focused on the declaration of symptoms, whereas a lot of additional quantitative information is now available. In addition, comorbidity and the heterogeneity of sub-populations make the classification of pathologies difficult.

Psychiatry must call upon new technologies to face these challenges. Connected tools will be able to digitize, quantify and objectify the process already in place in order to offer patients an integrative medicine that informs them, puts them at the center of the care and thus makes them proactive in their recovery.

Psychiatry has often been neglected by the medical community. The treatment and reimbursement of therapies are a problem. According to the WHO (2011)[2], psychiatric disorders would be the leading cause of disability in the world. Moreover, a report by the FondaMentale Foundation (2014, 2015)[3] highlights significant figures on the emergency situation. In the early 2010s, the estimated direct and indirect costs of mental illnesses were valued at 692 billion Euros per year in Europe, and 1,670 billion USD worldwide.

In order to face the major challenges of psychiatry today in the long term, it is possible to turn to new technologies. Indeed, the latest advances in cognitive and computational neuroscience will support psychiatry on several levels and through three fields: Digital Psychiatry, Big Psychiatry and Psychiatry Modeling.

Digital Psychiatry is based on digital health tools, such as smartphone applications or environmental sensors implemented in everyday objects, which measure physical activity, sleep or heart rate.

Gauld & al. (2020)[4], in their paper The Three Cultures of Computational Psychiatry, emphasize the link between psychiatry and statistics. The data collected thanks to these tools allow a better follow-up of the patient’s journey. They help reduce the spatio-temporal gap between a symptom and its declaration to the therapist during psychiatric consultations. They also make it possible to integrate environmental factors that can guide a diagnosis. Digital Psychiatry offers for the first time an overview of the patient’s living conditions. This connected and customized medicine will increase the relevance of data and the accuracy of diagnoses. It will also generate an enormous amount of data as a result.

Faced with this torrent of data, Big Psychiatry will provide better categorization and tracking of evolutions and dynamics for therapeutic predictions. Thus, the clinician will be supported in his diagnosis and will be able to measure the chances of success of a treatment with a maximum of information. It will also be possible to detect weak signals upstream to prevent a pathology and use the power of Big Data wisely.

Big Psychiatry offers great prospects in terms of prediction, but it is essential to understand the underlying mechanisms that govern a pathology with Psychiatry Modeling.

Beaumont & al. (2020)[5], in their paper Introduction to Computational Psychiatry, model psychiatric disorders with algorithms. They summarize the challenges of modeling in psychiatry with the analogy of David Marr, a great cognitive theorist. They explain: « Trying to understand perception by understanding neurons is like trying to understand the flight of a bird by studying only the feathers. It is simply not possible. It is essential to use an integrative medicine that takes into account the behavior of the brain, the physical and chemical makeup of the neuronal connections, its social interactions, as well as its interactions with all possible details of its environment.

Thus, psychiatry will not become a soulless medicine because of an abusive use of new technologies as some would like to make believe. It will reinvent itself in favor of a new and integrative psychiatry that better adapts to the needs of each individual.

Computational Psychiatry offers tools that will revolutionize current psychiatry. At the interface of « soft » and « hard » science, Digital Psychiatry, Big Psychiatry and Psychiatry Modeling will create a bridge between the subjective aspect of human feeling and objective and empirical data. These algorithmic and quantitative elements will not replace the intuitive dimension of the psychiatrist, nor his search for meaning. But they will enable, in a way unseen in the history of psychiatry, to accompany him in his analysis, his diagnosis and to allow better treatments.

As a radiologist today relies on imaging, the work of the psychiatrist will evolve. The expertise provided by advances in neuroscience and AI will expand and solidify the content of psychiatry, still rooted in the 20th century, and lead it into the new millennium. On Tuesday, November 16, 2021, at 11am, come and listen to Giuseppe Spinelli at the microphone of Pascal Becache on the occasion of the 4th Webinar #PharmaTalk of Digital Pharma Lab. Accompanied by Antoine Groheux, they will discuss about "AI, conquering emotions in Health!". 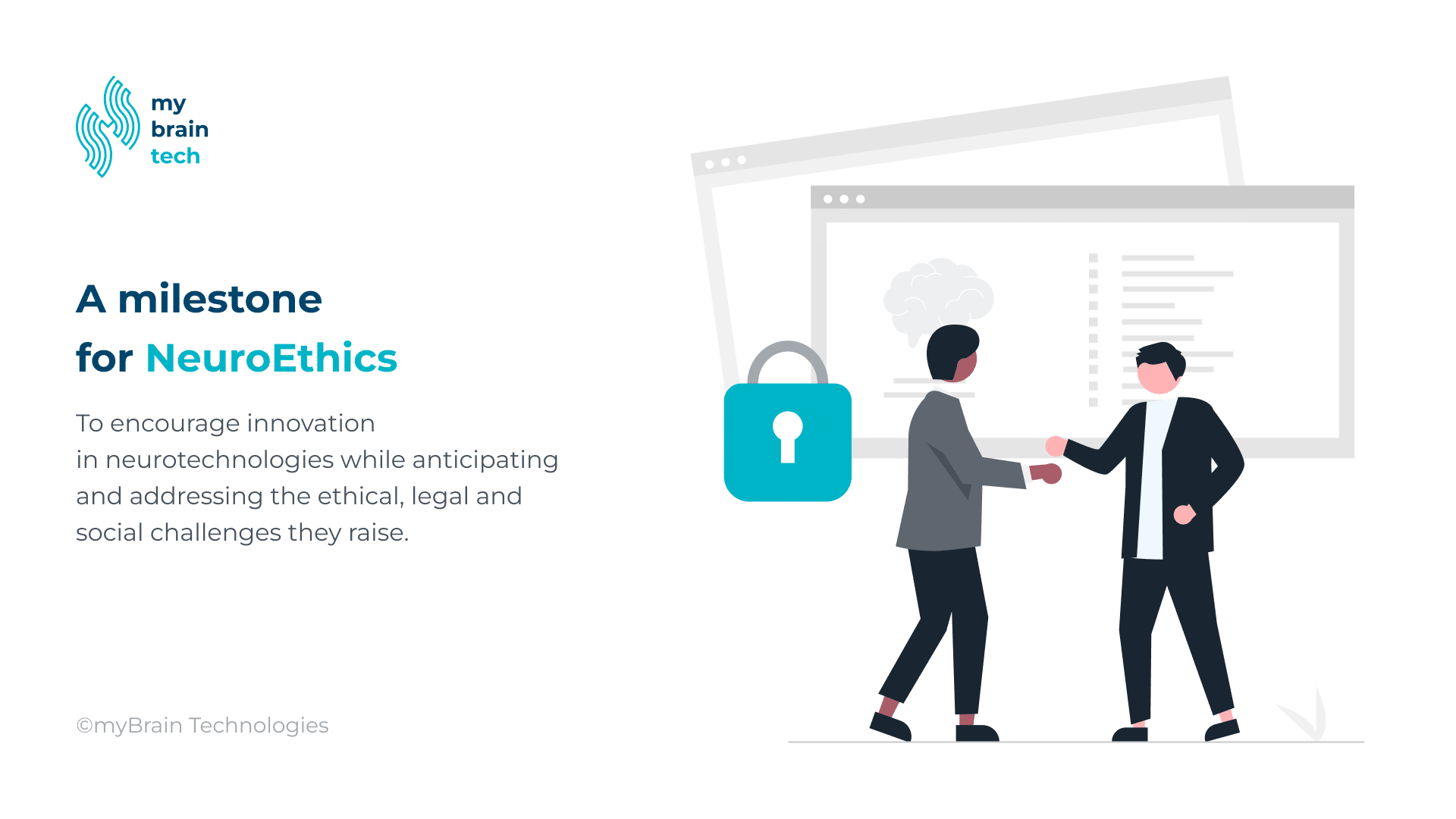 A milestone for NeuroEthics.

The capacity of neurotechnologies to probe and interfere with brain activity challenges notions of identity, integrity and autonomy of human being. Recent initiatives aim to help actors in the field anticipate and address ethical, legal and social challenges, while promoting innovation in this area. 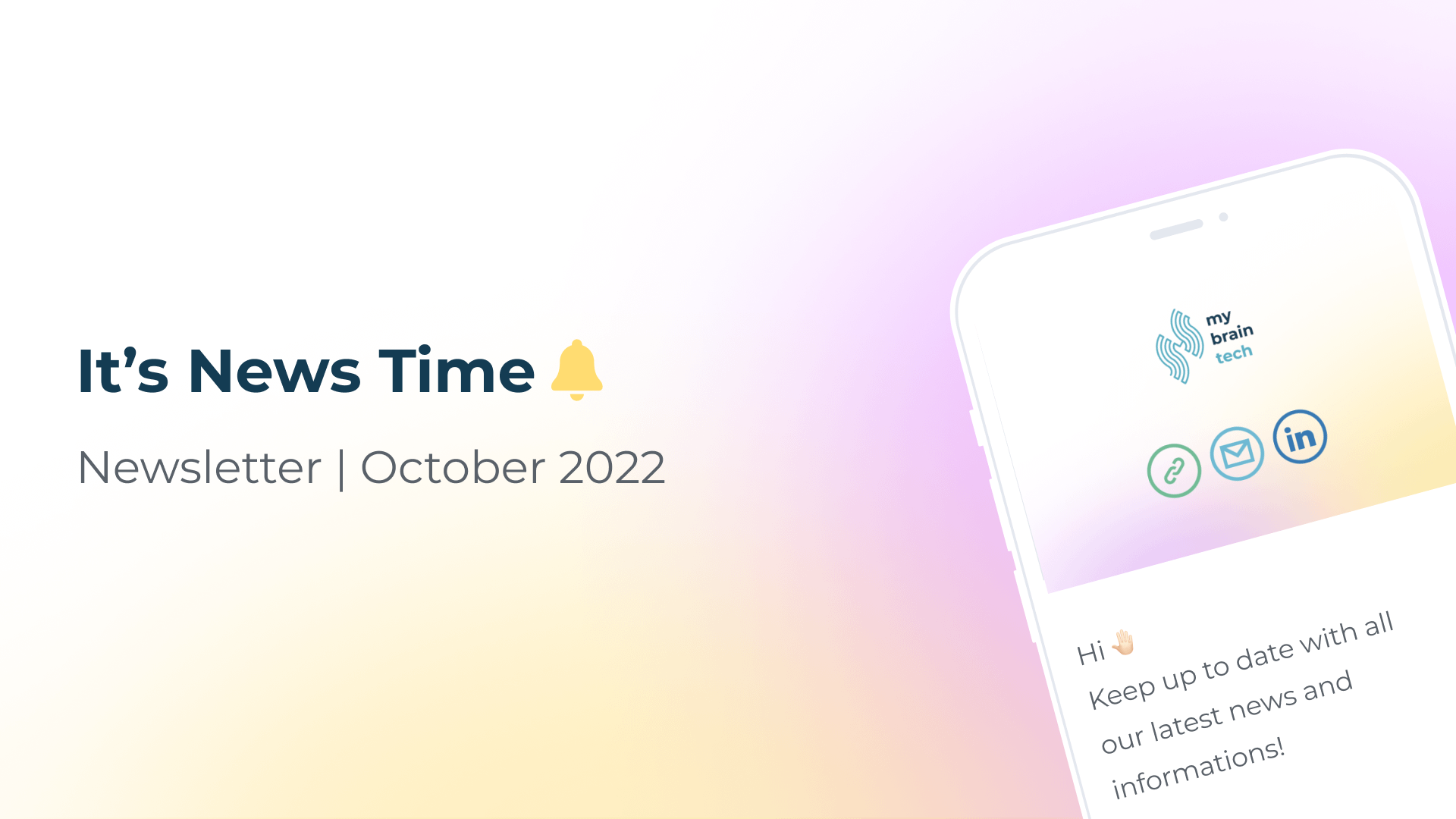 To travel miles in full peace of mind, in a car that understands and anticipates every need of the driver on the road, is becoming a reality! With its SaaS neuromarker platform and its new VRxEEG headset, myBrain Technologies makes it possible to create more robust AIs for cars ... 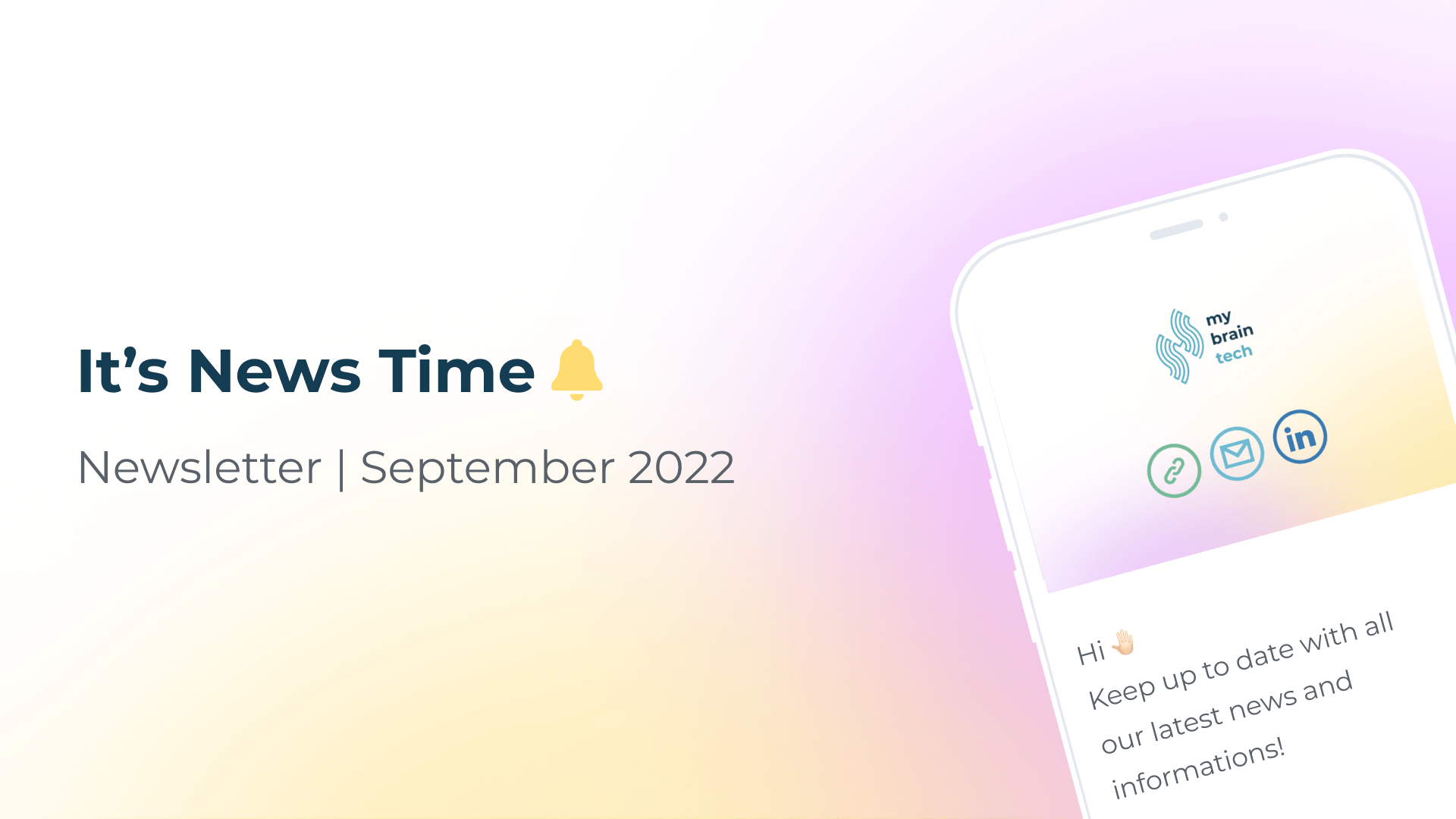 myBrain Technologies is committed to provide the most accurate offer possible to support its customers in the development of their products. With the will to enrich its platform of neuromarkers, our team is aware that a knowledge of the needs and sectors in question is the key to a value proposition ... 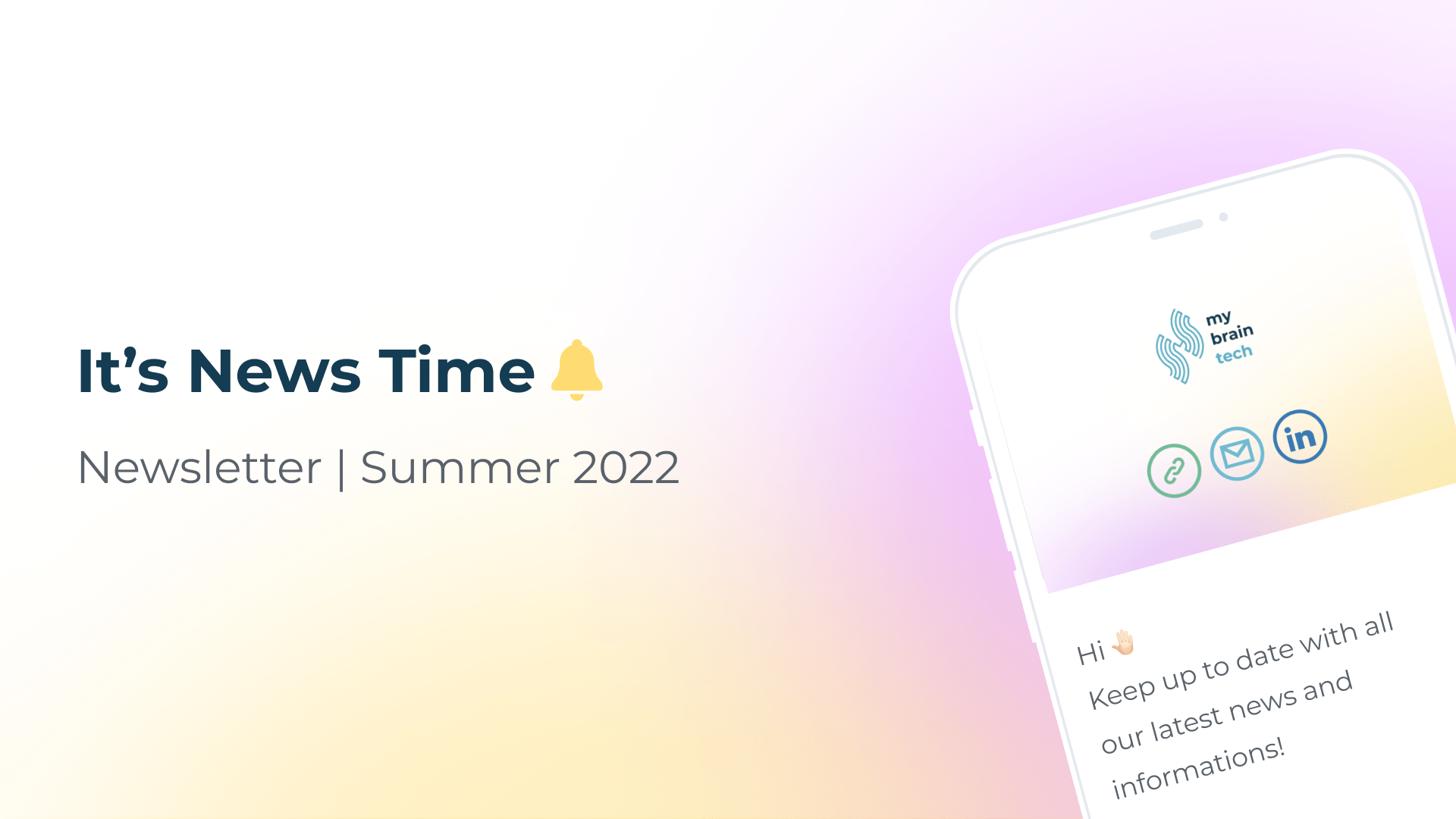 Statistics are here! Discover now our new statistic tools in Analytics to easily interpret your protocol results. Easily navigate, clearly see and quickly determine the effects of your products on your subjects to optimize your decision making ...

This website uses cookies to improve your experience while you navigate through the website. Out of these, the cookies that are categorized as necessary are stored on your browser as they are essential for the working of basic functionalities of the website. We also use third-party cookies that help us analyze and understand how you use this website. These cookies will be stored in your browser only with your consent. You also have the option to opt-out of these cookies. But opting out of some of these cookies may affect your browsing experience.
Necessary Toujours activé
Necessary cookies are absolutely essential for the website to function properly. These cookies ensure basic functionalities and security features of the website, anonymously.
Functional
Functional cookies help to perform certain functionalities like sharing the content of the website on social media platforms, collect feedbacks, and other third-party features.
Performance
Performance cookies are used to understand and analyze the key performance indexes of the website which helps in delivering a better user experience for the visitors.
Analytics
Analytical cookies are used to understand how visitors interact with the website. These cookies help provide information on metrics the number of visitors, bounce rate, traffic source, etc.
Advertisement
Advertisement cookies are used to provide visitors with relevant ads and marketing campaigns. These cookies track visitors across websites and collect information to provide customized ads.
Others
Other uncategorized cookies are those that are being analyzed and have not been classified into a category as yet.
Enregistrer & appliquer
Propulsé par

Get Your Free White Paper by Email